React Native v0.64 was released in March 2nd week of 2021. Let us look at the features of React Native latest version.

Hermes is an open source JavaScript engine optimized for running React Native. It improves performance by decreasing memory utilization, reducing download size and decreasing the time it takes for the app to become usable. This improves the app start-up time for React Native applications. In earlier versions, Hermes support for Android platform only was available. React Native version 0.64 starts supporting Hermes for iOS.

To enable Hermes on iOS, set hermes_enabled to true in your Podfile and run pod install. Hermes support on iOS is still early stage. This option is kept as an opt-in instead of default.

Inline Requires improves startup time by delaying execution of JavaScript modules until they are used, instead of at startup. Earlier we used to import the module at the top of the code file, but now we can directly do require on the line where it’s needed. This improves the performance of the application.

React 17 does not include new developer-facing features or major breaking changes. For React Native applications, the main change is a new JSX transform enabling files to no longer need to import React to be able to use JSX.

Upgrading to the new transform is completely optional, but it has a few benefits:

Android API levels 16 through 20 support will be removed. The new min Android SDK version will be 21+ moving forward.

React Native developers can make use of the new features of the latest version while creating new applications or upgrading their existing apps.

RayMish is a renowned Web & Mobile app development company & the best IT Software Solutions provider based in India. RayMish has worked with startups and enterprises in bringing their MVP product vision to life. 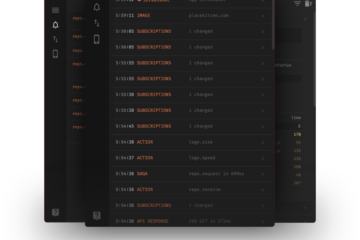 Inspecting apps is now as easy as it was always meant to be. Effortlessly inspect React JS and React Native mobile apps with Reactotron, a free desktop application. Reactotron can help you debug better by Read more…